PCS, laptops, smartphones, and the kit that runs the Internet are all digital computers. In those machines, all the data and programs (apps) boil down to discrete 1s and 0s. This binary information is processed by the devices we use daily. However, before the 1980s, a different type of computer was widely used in companies, universities and governments, the analog computer (or analogue for the Brits). Analog computers did not divide values down to 1s and 0s, but worked on continuous values represented by continuous electrical voltages and currents.

In 2016 I wrote a brief article about an analog computer I saw for sale on the UK EBay marketplace site. The Vidac 336 made by a British company called Computing Techniques. Then in November 2019 I was contacted by a former employee of the company, a Bill Nash, who read the article and provided some interesting background to Computing Techniques and Vidac analog computers. In June 2020 another former employee, a Hugh Gibson, provided some additional recollections. This was followed in November 2021 by another former 1970s employee, Peter Hyde, who sent me an image of himself wiring up a Vidac chassis. 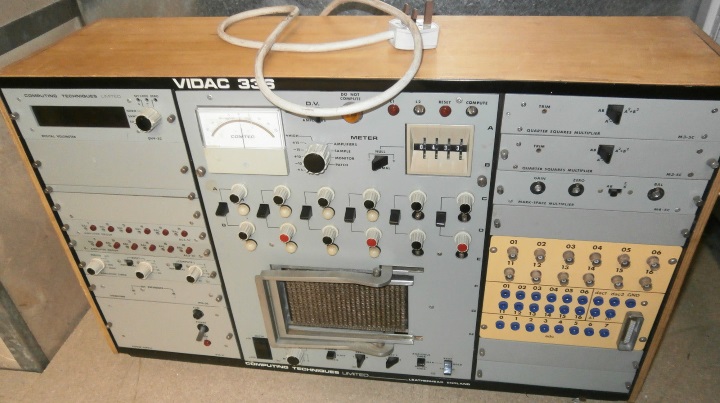 Bill Nash left Computing Techniques in late 1982, after working for them for seven years, and helping build many Vidac 336's. He moved to Australia, having married an Australian and deciding that opportunities may be better down under. He remained in Australia, lives in Sydney, and says:

What little I learned of the mysterious art of analogue computing has been very useful in understanding processes in general across my career – for over 20 years now I have been involved in Quality Assurance (QA) and Occupational Health & Safety, and that began with DEF Stan 21 at COMTEC.

Before Computing Techniques Bill was an apprentice at a firm called Mawdsley's in Dursley, Gloucestershire. He recently learned, long after the firm had disappeared and been repurposed as a housing estate, that Mawdsley's (who mostly made DC machines) had, during World War 2, made the special commutators for decoding machines at Bletchley Park. A decoding machine was known as the Bombe, the name originating from a Polish version of a decoding machine. Much of the Mawdsley’s war time output had gone into searchlight generator sets, with Lister Diesels driving them. (See here for potted history of the Mawdsley's company in Dursley, also on Grace's Guide.)

Computing Techniques was run by Bill's uncle Angus Nash (deceased). Angus worked for Solartron, manufacturers of equipment and instruments, as well as Solartron analog computers. (After passing through several owners, including the multinational Schlumberger company, Solartron is now a brand name for the multi-billion dollar Amercian coporation AMETEK Inc.). In the early 1960's Angus and a number of his colleagues left Solartron to form Computing Techniques. They wanted to exploit new technology in which Solatron were not prepared to invest, however, the relationship between the two companies remained strong. Computing Techniques was initially based in Leatherhead before moving to a purpose built factory in Billingshurst around 1970. There was a European office in Dusseldorf, Germany.

Angus Nash was the principal design influence behind the Vidac series. Bill says that at the time Angus believed that there was no way that clock times on digital computers could be increased to enable anything approaching true real time computation (it was KHz clocks in those days being regarded as quick). Accurate A to D/D to A converters were at that time in their infancy. Computing Techniques were using products from, and were UK agents for, Analog Devices, based in Ann Arbor, Michigan (MI).

There were four Vidacs in the series, the model numbering was based on the number of patch connections available in each machine:

There is a Vidac 1224 on display at the Bonami Games & Computers Museum in Zwolle in the Netherlands: 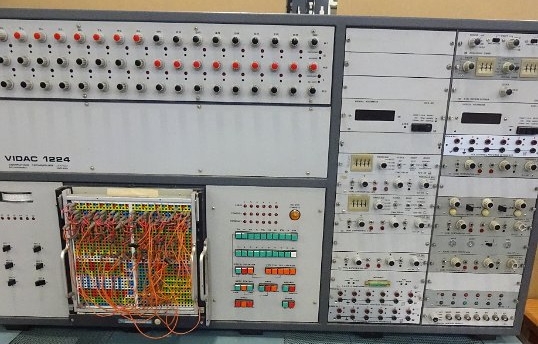 Three 1224's were sold to Culham labs in the early 1980's. These which were used on the Joint European Taurus project (the world's largest operational magnetically confined plasma physics experiment). The project modelled the processes which later were implemented at CERN.

A hybrid version of the 1224 was in development by 1982. It could be set up using a digital computer to improve the speed by which the integration functions could be optimized. The input potentiometers on the amplifier function cards were replaced with A to D/D to A converters, thus, the digital machine could quickly optimise settings.

The Vidacs were only part of the range, the business was built around high quality operational amplifiers with low drift characteristics, mostly MOS and MOSFET designs, essential for analog computing. Computing Techniques also manufactured digital panel meters, initially using NIXIE tubes, but later the newfangled LEDs and LCDs, a good proportion of which were incorporated into military equipment. A Computing Techniques data logging device, the Lympet Logger, is announced in a product news article from a journal issued in April 1979, shown below.

Angus Nash had recurring heart trouble by 1983, and a series of unfortunate business decisions meant the company fortunes were waning. A Dutch company, called B.R., now a big manufacturing automation company in Europe, had a mortgage on Computing Techniques from 1981 onwards. Computing Techniques was wound up in 1983, the British economy was depressed and the new fascination with digital computing had diverted attention from analog computers.

As a result of the dissolution, B.R. was able to take over assets. Computing Techniques was able to carrying in a new form, ultimately owned by an Australian entrepreneur, who had put in an Australian manager. Coincidentally, Hugh Gibson was also Australian.

Hugh Gibson started work at Computing Techniques (Mfg) Ltd as a young Australian in September 1983. Computing Techniques had moved to new premises in Bramley. Hugh worked as a hardware and software developer, and as a QA manager. The company was registered to BS5750: Part 1, and Hugh thinks Computing Techniques were the first company to achieve registration to the new system. At the continuing company Hugh developed a digital interface for the Vidac 1224 which was shipped to the University of Havana. This had been organised by the United Nations (UN) Development Programme through the International Atomic Energy Agency (IAEA). The IAEA was helping Cuba with technology, Cuba was performing nuclear research in the 1980’s and they trained nuclear scientists with plans to build a nuclear power station, which was never completed.

When Hugh was at Computing Techniques the company made accurate digital frequency panel meters for the Central Electricity Generating Board (CEGB). The work for the CEGB included frequency alarms, which were like panel meters but had digit switches on the front so a high and low frequency point could be selected. Hugh remembers visiting the CEGB control room at East Grinstead. Computing Techniques got involved in a temporary signalling system for the CEGB, and developed various bits of hardware for them.

Hugh left in 1987 and continued working in hardware and software development, concentrating on software from about 1990. Hugh is currently Chief Technology Officer (CTO) of Sellerdeck Ltd.

Peter Hyde worked at Computing Techniques in the 1970s and sent the image below of himself working on one of the bigger Vidac models. The photo was taken by a John Palmer. Peter remembered lots of wiring, especially to the patch panel, with all screened cables. Peter worked at Computing Techniques for four years, 1972 to 1976 before moving to ITT in Brighton to work in the Research and Development department. In 1983 Peter moved to Perth, Australia, where he now lives, retired. He also remembers a Eddie Thaddeus, who he thinks was the manager.