This article provides some information on the terminology used with displays on cell phones, tablets, computers, televisions and other electronic devices. Displays come in various physical sizes and resolutions. In the marketing material for a device the physical size is normally expressed as a figure in inches. This figure is the diagonal (corner to corner) measurement of the screen.

For example the Apple iPhone 6 screen size is given as 4.7 inches. To find the physical width and height of a screen the manufacturers detailed specifications need to be examined, or use a ruler on the device itself. The screen resolution is the number of pixels (the dots used to form the image being displayed) that make up the screen in its width (or x axis) and height (or y axis) dimensions. A screen that has a resolution of 480×320 is 480 pixels wide by 320 pixels high. (See How Computer Screens and Printers Show Images to learn more about pixels.)

There are many types of display in the multitude of electronics devices around. The different resolutions have been given acronyms over the years that started when IBM invented the Video Graphics Array (VGA) computer display hardware in 1987 (see the footnote for what was used prior to VGA). The VGA display had a resolution of 640×480 and this format became very popular and widely known by the letters VGA. Technology never stands still and resolutions higher than VGA soon arrived. A consortium of companies set up the Video Electronics Standards Association (VESA) to promote common video technology specifications at higher resolutions than VGA, but with backwards compatibility, a Super VGA. This term was abbreviated to SVGA and defined a resolution of 800×600. Successive hardware releases by manufacturers continued to increase the resolution of displays and with new hardware came new acronyms. IBM had its Extended Graphics Array, XGA, which supported 1024×768. VESA released a standard at the same resolution called Extended Video Graphics Array, EVGA. While both XGA and EVGA supported 1024×768 the letters, like VGA, covered not only the resolution but also the hardware. However, the acronyms became associated with the resolutions. The hardware that those letters referred to has long gone but the resolutions remain.

The rise of widescreen displays added a W to the acronyms. These wide screen versions of VGA, SVGA and XGA usually had the same height but were 25% to 34% wider (different manufacturers produced differing number of pixels in the x-axis as well as some variation in the y-axis):

Some manufactures have produced wide versions of wide screens! These are dubbed Ultra, hence a Ultra Wide Video Graphics Array, UWVGA at 1024×480, probably better than calling it a short XGA.

Advances in technology have not only seen computer screens and televisions get bigger and support high resolutions, it has also seen mobile devices get better screens. Games consoles and cell phones have also been given bigger screens with more pixels. Unlike televisions and computers phone screens are commonly held in portrait mode. Thus when referring to the screen resolution the x-axis will be smaller than the y-axis. The first Apple iPhone had a resolution of 320×480. The x-axis being half that of a VGA display with half the number of pixels, hence this resolution being referred to as HVGA (Half Video Graphics Array), not to be confused with the H in HD. Similarly a device that is QVGA (Quarter Video Graphics Array) has one quarter the number pixels of a VGA display. The Galaxy Pro has a QVGA display with a 320×240 landscape screen.

Just like the televisions and computer screens that ended up in wide formats the same applies to mobile devices. Wide Quarter Video Graphics, WQVGA , is 25% bigger than QVGA at 400×240, though variations may occur (e.g. 384 or 428 on the x-axis). 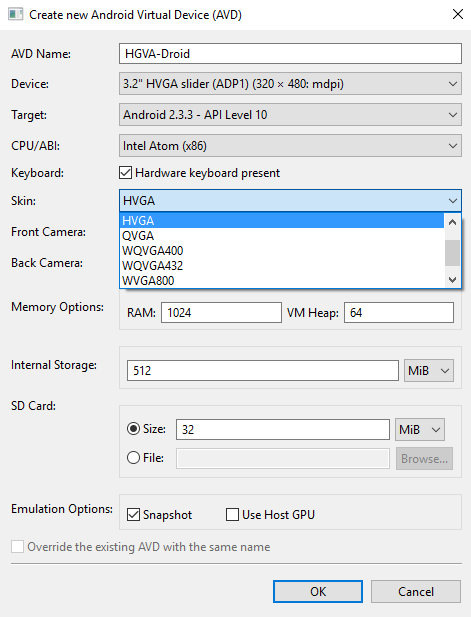 The lists use some familiar names for the screen resolutions, such as HVGA or WSVGA. What about the less familiar names? Because of the wide variety of Android devices available the widescreen options can show a number with the name, such as WVGA854 or WXGA720. This number is a hint as to the actual screen resolution of the skin to be used for the AVD. A WVGA screen would be expected to have a 800×480 resolution, calling it WVGA854 means it is a 854×480 size display, likewise for other names with numbers. The names correspond to displays that are, or used to be, commonly available devices. (There are a couple of naming inconsistencies.)

Side note: Early versions of the Android SDK supported non-rotating skins, QVGA-P at 240x320, QVGA-L at 320x240, HVGA-P at 320x480 and HVGA-L at 480x320. These were removed in 2009 because QVGA and HVGA skins began supporting rotation. The non-rotating screen names only appear in the AVD Manager if API Level 3 or earlier as a target is selected (and the relevant obsolete SDK is installed).

The displays on mobile devices have seen increases in resolution for the same size screen. When Apple brought out the iPhone 4 the screen size remained the same as the previous model at 3.5 inchs, but the resolution changed from 320×480 to 640×960, twice the resolution in the x and y dimensions resulting in four times the number of pixels in the same space. This was called the Retina display and provided for much sharper and clearer images and text. This resolution is twice that of a VGA screen and is dubbed DVGA, D for double. New devices follow this trend of packing more pixels onto the display. The iPad 3 has more pixels than a FHD television with a Quad Extended Graphics Array, QXGA, display at 2048×1536. (Acronyms can be confusing, Q on QXGA refers to Quad as opposed to Quarter when on QVGA!) Even low cost Android tables often support FHD displays.

There are devices that use displays designated qHD, meaning a quarter of FHD at 960×540, or nHD for a ninth of FHD at 640×360 pixels. These displays allow for scaling of FHD media without cropping. (More acronym confusion with lowercase letters for quarter and ninth!)

Displays keep packing in the pixels. Even the smartphones are getting denser and denser displays, beyond FHD. The Samsung Galaxy S7 has a 1440x2560 resolution, or Wide Quad HD, WQHD. For televisions the Ultra High Definition (UHD) screens, a.k.a 4K screens, have a resolution of 3840x2160, four times as many pixels as FHD. Great for large screen TVs, but 4K screens are seen on laptops! Even bigger are 8K screens at 7680x4320! Manufacturers keep pushing the limits of resolutions, even though humans are unlikely to notice any differences beyond FHD.

This article has only scratched the surface of screen resolutions names. If you really need to know more here is a Wikipedia article.